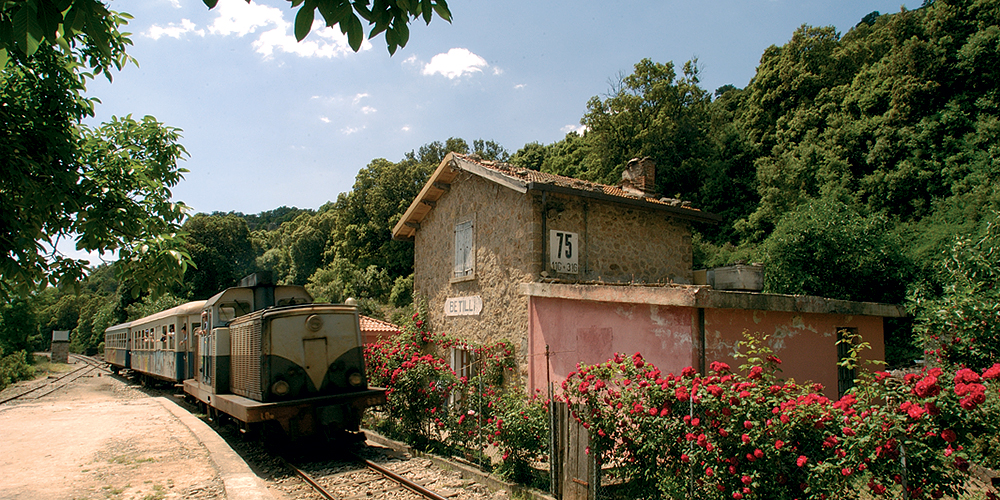 The journeys on Trenino Verde are one of the best way sto travel and to know the different aspects of the Island landscape, especially of the inland area.

The ARST network is long more than 600 km and it runs across almost all the geographic regions of the Island.

In our region, the Trenino Verde passes trought 7 of our villages. You’ll live a special trip, not only a physical one but a mental trip as well plenty of images floating in the time, images of forgotten attitudes, images of memories, habits, customs and past lives.

The train reaches the station in Orroli among the houses of the village. It is the point from which leave many excursions to visit the countryside and different archaeological sites like the famous Domus de Janas and over 40 nuraghes including  the pentalobate Arrubiu.

Situated in a commanding position on a tableland, not far from the nice station, Nurri is a lively village that with its traditional agropastoral activities is supporting new industrial enterprises especially connected with milk and dairy farming and tourist section.

Situated in a panoramic position over Flumendosa valley a few kilometres from the station, it was formed by the union of two tiny villages: Villanova e Tulo.

In the countryside there are several traces of the past such as the big Nuraghe Adoni.

Esterzili is situated a few kilometres from the station and from Betilli stop. It is on the edge of a mountainous area at the boundary of the Barbagia di Seulo. The countryside is dominated from the presence of Monte Santa Vittoria (m.1.212) that was one of the last shelters for the ancient proud inhabitants against the Romans who invaded the island. In the country side there is the mountain station of Betilli.

Isili station is the terminus of the transport public line from Cagliari. In the town there is a very interesting Museum of Copper and Textiles. At the northern town’s periphery there is the white Nuraghe Is Paras one of the best preserved of the area that used to be a sort of castle protecting the crossing of the Rio Mannu valley.

Nurallao station is situated in a dominating position over the village.

Since ancient times Nurallao was famous for its caves of lime and clay. Near the village there is the beautiful Park of Funtana Is Arinus. At Aiodda there is an interesting archaeological area with a “tomb of the giants” and row of menhirs.